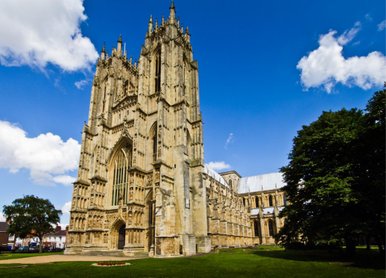 Towns have always been hard to define, but have a larger population than a village, and some households who can earn their bread and butter without having to grow it themselves. The Romans brought towns to Britain, and in Eastern Yorkshire Brough, Malton and of course York were Roman foundations. Neither Beverley nor Hull can claim Roman roots. Beverley town resulted from the magnet of a miracle-working Anglo-Saxon saint. Hull (like Hedon and Airmyn) was deliberately planned in the early middle ages as an economic money-spinner for the already powerful (Hull was founded by a king, Hedon by an earl, and Airmyn by an abbot)l.

The Romans and later town founders chose their sites carefully, for natural resources and defensible positions. If, however, your location was where a saint had died, you could not choose the site: and that was the case at Beverley.

St John of Beverley, a Northumbrian, was educated by Abbess Hilda at Whitby Abbey, and became bishop of Hexham, then bishop of York (archbishops of York came later). Famous at Hexham for miracles, he performed more when he came to York, and more again after he retired to a monastery ‘In Deira woods’ dying there in 721. That place in the woods is now what we call Beverley, the beaver lake. [Link to St John]

Saints bring pilgrims, and pilgrims need food, drink, shelter and perhaps shoes, clothes, horse shoes and keepsakes. So an enterprising family could stop ploughing, sowing and harvesting, and instead live by providing for pilgrims, in modern terms the hospitality industry. The town grew. But because the site was not chosen for its convenience, the south side of the monastery was so wet (Woodmansey, woodman’s lake) that the town was forced to grow northwards.

By the time of Domesday Book (1086) the great survey ordered by William the Conqueror, Beverley, the only town in the East Riding, was already a place with some tax privileges, organised by the archbishops of York and the canons of the Minster. Its status was confirmed in the 1120s when it was named as a borough, with the trading privileges of York. The 1120s also saw the establishment of a northern Saturday Market to rival the southern Wednesday Market. Finally around 1150 a northern chapel, later to be St Mary’s church, was added and the shape of the town lying between the two churches was established. [Link to St Mary’s church Beverley]

From around 1120 to around 1530 the town grew up and prospered, with a few setbacks. Its merchants went all over western Europe. It endured wars, piracy, plagues, rebellions, like other English towns. It quarrelled with Hull over the right to use the River Hull as an outlet to the Humber. It built and rebuilt its beautiful churches. Pilgrims came endlessly to the shrine of St John, and additionally the town became a famous Sanctuary, admitting those accused of crimes into safety. Its soldiers went to the king’s wars, its men in ships to trade overseas. Wool, hides, cloth and lead went down the Hull to Europe: wine and herrings, with luxury goods, came back to Beverley. Friaries and hospitals were established. and the town’s streets were filled with clergy. Civic ritual was elaborate, with processions, mystery plays, minstrels, many organised by the trade guilds headed by the merchants. [Link to civic life and also to sanctuary] The defences of the town were never really more than a token, as the five gates or bars were not joined by walls, unlike Hull.

But in the 16th century a huge disaster hit Beverley and many other towns. The Tudors closed all the religious houses, and pilgrimages stopped. Beverley went into a long economic depression with the loss of the religious revenues, at the same time as its textile trade failed. Because Beverley rebelled in 1536 in the Pilgrimage of Grace, Henry VIII favoured loyal Hull, and the 1500s were very difficult for the town. The Percy earls of Northumberland, who had helped the town from their castles at Leconfield and Wressle, also lost power. The churches survived, just. The Minster became a parish church. St Mary’s fell down in 1530 but was restored.

The Civil Wars brought further troubles. Charles I brought his whole Court to Beverley in July 1642, trying to gain access to the huge Arsenal at Hull. He failed, and the town was left to successive waves of troops who plundered the town, and broke the church windows. At Charles’s trial for his life, the first witness was from Beverley, describing how the royalists had taken his Hull Bridge house and used it as an army camp.

With the Restoration of the Stuarts, and their replacement by King William and Queen Mary in 1688, the town’s fortunes recovered and it was transformed into the Georgian town that is still recognisable today. The street plan is medieval, but those streets have elegant 18th century houses, inns and shop fronts. Beverley became fashionable: as the East Riding administrative centre, gentry families built town houses and Assembly Rooms, came to town for the Assizes, went to race meetings, and supported such town improvements as the Market Cross. The town attracted a number of rich Americans, the Loyalists, who had to leave after the British were defeated in America. [Link to Georgian Beverley and American loyalists]

19th century Beverley grew rapidly, acquired a railway and new industries, and a famously corrupt government, which led to it losing its privilege of electing members of Parliament:. There was poverty and progress, Victorian benevlolence but also the horrors of the workhouse and outbreaks of cholera. Some gas lights were provided around town, but it was not until the 20th century that clean water and sewers became widely available.

The population rose and rose in the 20th and 21st centuries, as people found work in town and also many people came because it was a nice place to live, with good schools and the commons that ringed the town providing a breathing space for the tightly packed houses. Wars came with barracks and an airfield. The old town accepted change well, and the shape of the town, with its Saturday and Wednesday Markets, and the churches at either end of the central area, are still those planned centuries ago.