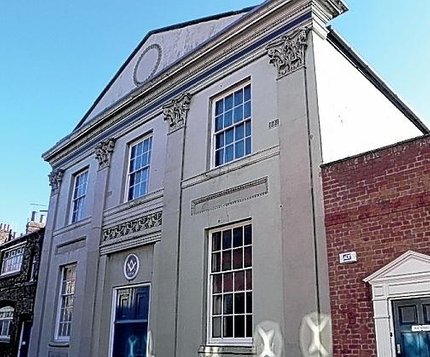 Freemasonry is a mystery to many people, and its fascination remains. Its origins perhaps lie in the brotherhood of medieval masons, originally travelling craftsmen who lived in ‘lodges’: now, worldwide, there are some 6 million masons (including separate women’s Freemason lodges) with differing rituals and some secrets.

The Hall in Beverley is the meeting place of four Masonic Lodges, three Chapters and a number of other Masonic Degrees.

Masonic meetings started in Beverley pubs in the late 18th century, first at the Golden Ball in Toll Gavel, then at the Tiger in North Bar Within, and at a number of other places until 1928 when they moved to the Freemasons’ Hall, Trinity Lane, a grade II listed building.

It was built as a Wesleyan chapel in 1856, and has an unusual façade to Trinity Lane, with a painted frieze. Nearby the manor of Holy Trinity was the site (now under the railway station) where the Knights Hospitaller lived from c.1204 (conspiracy theorists might find that interesting). Come and see for yourselves: there will be Brethren to answer your questions about Freemasonry and the building.