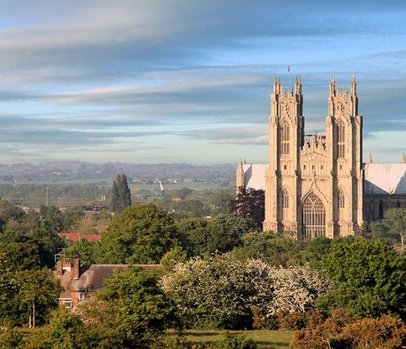 The roots of Beverley Minster go back to the 8th century, when John, Bishop of York, founded a monastery for monks and in a later source, also for nuns under the leadership of Polfrida housed on the south side in St Martin’s chapel. John had been educated at the double house of Whitby run by St Hilda, so that a monastery for both monks and nuns would be familiar to him. When John died in the year 721 his body was buried in the church he had founded. He was canonized in 1037 as St John of Beverley, and Beverley became a popular destination for pilgrims.

In 1214 the tower of the Norman church collapsed. The only obvious survivor of that early Norman church is the font. A new church was built around St John's shrine. It took over two centuries to complete the glorious church we can see today, and work was not complete until around 1425. Because the work took so long to complete Beverley Minster exhibits three distinct phases of Gothic style, from Early English to Decorated, and finally, Perpendicular Gothic.

The result is an exquisite example of Gothic architecture, making Beverley Minster arguably the loveliest Gothic building in England.

This Heritage Open Day, come to Beverley Minster to follow in the medieval pilgrims’ footsteps, who on ‘holy-days’ came to John’s grave seeking peace, health and comfort, or to follow those who knelt before the sanctuary chair as they sought asylum from harsh laws.

Beverley Minster is open every day of the year for visitors, with some special events for Heritage Open Days.