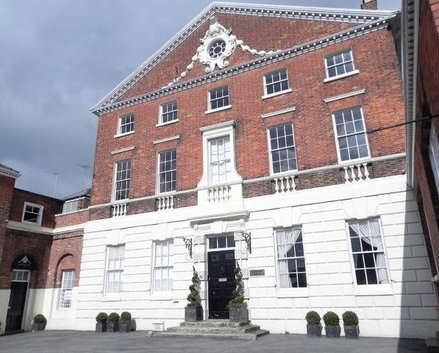 Norwood House is a Grade I listed building, defined by Historic England as of ‘exceptional interest’ – a very rare grade: Lairgate Hall and North Bar House are the only other Grade I Beverley houses. At Norwood House the gates, gate piers and railings facing Norwood are listed separately as Grade I. Jonathan Midgley, a rich lawyer, built the house and moved there in 1760, the architect probably being Thomas Atkinson of York. Midgley’s daughter and heiress, Mary, ran off to Gretna Green with an American from Virginia, William Beverley: he extended the house, and was mayor of Beverley town, but died in poverty. The house thereafter was owned by many different people (including a notorious countess, age 59, who married her groom, aged 27). Of course, it has a ghost, Alice.

For some years it was part of the Beverley High School. When the school moved out, the house became derelict, but fortunately was rescued firstly by the Brantingham Group, and then by Mr Mark Parkes, Group Managing Director of

Bostonair Group Ltd, by whose kind permission the house is open on 13 September. Mr. Parkes has completed a full and thorough restoration of the building to secure its future, creating a 21st century working space whilst preserving the unique fabric of what is a very special building. The inside is amazing, five stars by any reckoning, with many superb original Georgian and Regency features.

During the opening of Norwood House this year, a short video outlining Bostonair’s history and the services the Group provide will be shown.

The High School, built in the grounds of Norwood House, with details echoing those of its neighbour, is also open on 13 September.