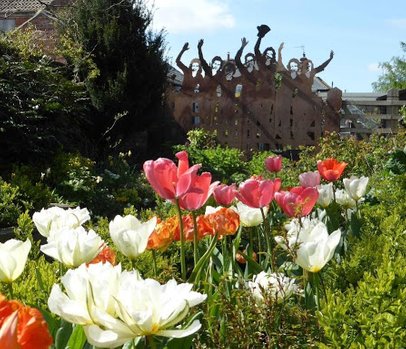 The name ‘North Bar Without’ gives rise to local jokes, but of course it means the street beyond or outside the North Bar, the principal gateway to the town for many centuries.

No. 25 is a house of 1864 by the Beverley builder Marmaduke Lowson Whitton, who lived at no.27, which he also built. Whitton’s brother James was a Lincoln-based architect, and the brothers worked together, building most of Willow Grove and converting the prison complex in Norfolk Street.

At some point no.25 was acquired by the council and was the Chief Fire Officer’s home until 1963 when it was bought by a young widow and her family for £1,900. It was divided into 2 separate flats during the 1980s but has recently returned to one ownership.

The current owners moved into the property in the early 2000s. At this point the front garden was planted solely with one giant Bergenia and a Cotoneaster, and the back garden was mostly grass with a few elderly shrubs and trees. Since then dozens of additions have been planted including roses and fruit trees. Totally organic (the garden boasts a new 5,000 litre rainwater collection tank,) it is home to a variety of hens and ducks and as such is not a pristine show garden, but a lived-in verdant green space.