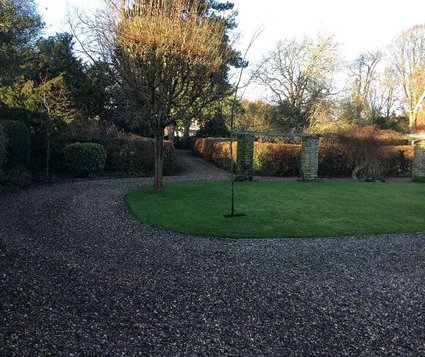 This house and garden were originally part of the grounds of Langholm, a large red brick villa built in 1908. In 1980 the house and grounds, then owned by the Council, were auctioned and the present owners bought one of the two plots. The house was designed by the owners, with the help of architect Roger Sangwin, and was built by Chris Cammock.

On approaching the house from Langholm are four stone pillars, a feature of the original garden, covered in Clematis montana. The feeling of maturity is amplified by the large number of specimen trees including a large domed Parrotia, Metasequoia and Cypress.

If you enter the garden through the gate from Seven Corners Lane you will pass a historically interesting wooden shed (ask the owners), and on reaching the house see sculptures, including a small beech tree by Steven Blaylock.