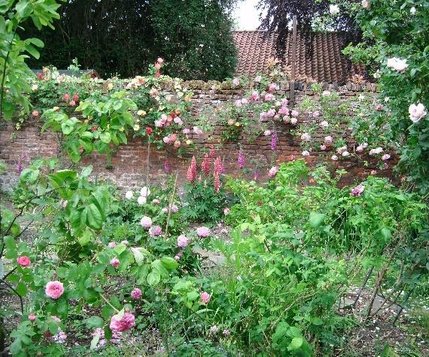 Access: Gravel drive but most of the garden can be viewed with wheelchairs.

The Grade II listed house was designed and built by William Middleton in 1769, (Middleton was the best of the 18th century Beverley architect/builders, and his portrait hangs in Beverley Guildhall). No. 39 has 5 bays with later top storey, Edwardian bay windows, and has its original doorcase on to the street, with Gothick fanlight. Its previous owners include Neville Hobson, one of a famous dynasty of Beverley lawyers.

The garden lies to the south and west of the L-shaped house, widening beyond the buildings and stretching westward to a former entrance on to Seven Corners Lane. The gravelled drive leads you into the newly built stone seating area under the shade of an enormous beech tree. Walking down the garden are herbaceous borders on either side and steps up to the rose and dahlia beds. The hidden garden is to the right, mainly fruit and vegetables. Be aware there are beehives at the end.