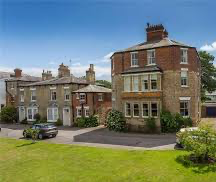 No.7 is one of the clever conversions by the Whittons in 1880, from the former prison building of the East Riding House of Correction, into a private house. In the west wall of number 7, can be seen the ghost of the former treadmill. The houses in this range have a common green space to the north, giving them a rural setting, and they are also a few yards from Hurn, part of Beverley’s extensive common lands (and on Hurn were the archbishop’s gallows, hence nearby Gallows Lane).

Lying beside Octagon House, No. 7 has a charming garden designed for the present owners. It has a terrace leading to a raised circular lawn and beds which have been planted with perennials and noteworthy evergreen shrubs and grasses. There are several varieties of maple trees dotted around the garden and the stark white trunks of a row of silver birch punctuate the backdrop.