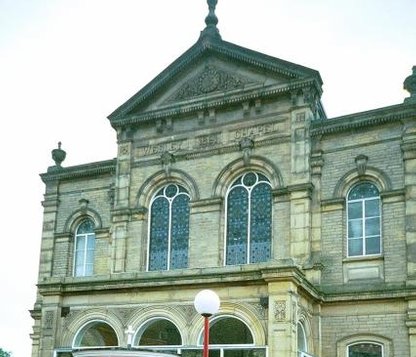 The Methodists established their congregation in Beverley in the 1750s, in a house in Wednesday Market where John Wesley had preached on his first visit in 1759, the first of many visits.

The following year George Whitefield preached in the courtyard of the Hotham family’s grand house in Eastgate (demolished in 1766). A building in Wood Lane was bought in the names of leading Methodists in 1781. Other buildings followed, some to house different forms of Methodism, that eventually united once more under the roof of the Toll Gavel United Church in the 20th century.

The Toll Gavel building built in 1890-1892 was designed by Morley & Woodhouse of Bradford, is of red brick with an Italianate stone front. A schoolroom was later added on the Walkergate site. The interior is a fine building with original fittings of the 1890s, with galleries on 3 sides, original pews, an organ, painted columns, stained glass windows and a decorated plaster ceiling. The church is set back from street providing a peaceful oasis in a busy town.

On the Heritage Open Day, Toll Gavel church will be preparing for the harvest festival, with displays of harvest fruits and flower arrangements.