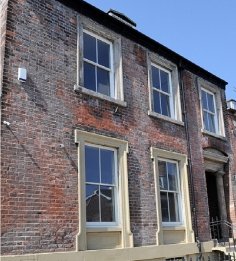 As seen on BBC2's 'Restoration Home' TV show, 114 Coltman Street is an early Victorian townhouse undergoing a total transformation from being a derelict wreck on the brink of collapse, back to the grand family home it once was.

Built in the early 1850s, the property was once owned by one of Hull's most famous sons, the Trawler Fleet owner and philanthropist, Christopher Pickering. The house was then owned by his business partner, Samuel Haldane, until it became a children's clinic in 1921 up until the late 1960s, becoming five flats in 1983.

By the turn of the century the house had fallen into disrepair and had been damagingly vandalised, before being rescued by Catherine and Simon Kelsey who are in the long process of restoring it.