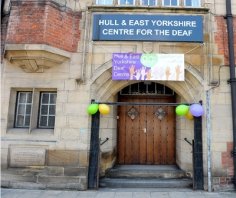 Hull and East Yorkshire Centre for the Deaf

The charity was established over 100 years ago, by a group of Deaf people who met regularly under a street light down High Street in Hull.

These locals met, to talk and communicate in their own language, in a society that pretty much ostracised them for being different.

After a while, a room in a local pub was rented to them, and from there on in the charity started to take form. They rented their first base down at 179 High Street in 1853 and from there the charity grew in size and popularity. Eventually the charity was well enough established to find premises of its own that more suited its needs and size.

They rented 53 Spring Bank, a place that is now Disc Discovery, and we purchased a plot of land approximately 10 doors away. In 1926 the newly built Hull & East Yorkshire Institute for the Deaf and Dumb (as it was then called) was opened.  Although the name has changed we have continued to remain in this beautiful building as it suits our needs perfectly. The building cost a whopping £14,500 to build, which back in 1920’s Hull was a tidy sum. The charity owns the building outright and has no affiliation with the county council or the government, we run ourselves and our charities funds.